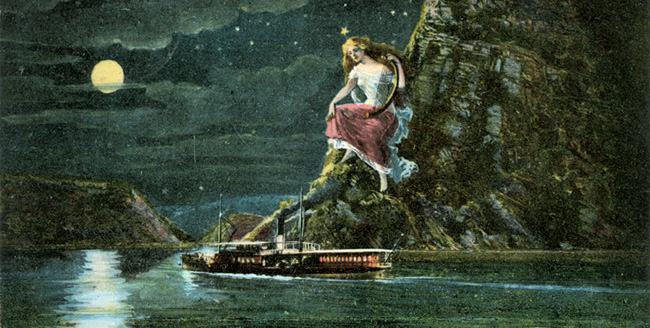 From a young age, I was indoctrinated about the dangerous power of beauty. It was told to me in a story – my favourite story – which was closely connected to my own identity.  I was named after beauty folklore.

My name, Loreli, came from the myth of The Lorelei (or Loreley). The story takes place at the Rhine River, in Germany. Legend has it that, at a particularly treacherous bend in the river, this is where a beautiful maiden, named Lorelei, was betrayed by her lover. She cast herself into the river in despair and came up as a water spirit. Because of her infinite pain and anger and desire for revenge, she attracted fishermen to draw close, enticing them toward the rocks and their death.

While The Lorelei legend offered a practical lesson for boaters on the Rhine River to proceed cautiously, I learned from the story that beauty had an alluring power and it wasn’t always friendly.

“Tell me about my name, Daddy.”

I especially liked the preface. My dad told me that he had been teaching about the Rhine River in his high school geography class. I was a few days already born into this world and there was a growing urgency for Dad and Mom to pick a name for their second daughter.

I still like the idea of being a distraction to my dad at his workplace.

More recently, I asked him about the wisdom of giving me such a namesake, which means “luring cliff” or “temptress.”

Mom interjected. “We were thinking of naming you Tammy.”

Dad suggested that perhaps that “luring” quality, in the hands of the Lord, would be used to draw others to him.

What does your name mean? Is there a story behind it?